The Silicon Valley Venture Capitalist Confidence Index® (Bloomberg ticker symbol: SVVCCI) is based on a recurring quarterly survey of San Francisco Bay Area/Silicon Valley venture capitalists. The Index measures and reports the opinions of professional venture capitalists on their estimations of the highgrowth venture entrepreneurial environment in the San Francisco Bay Area over the next 6 – 18 months.1 The Silicon Valley Venture Capitalist Confidence Index® for the third quarter of 2016, based on a September 2016 survey of 32 San Francisco Bay Area venture capitalists, registered 3.88 on a 5 point scale (with 5 indicating high confidence and 1 indicating low confidence). This quarter’s index measurement rose significantly from the previous quarter’s index reading of 3.60. It also surpassed the nearly 13-year average of 3.71. Please see Graph 1 for trend data. 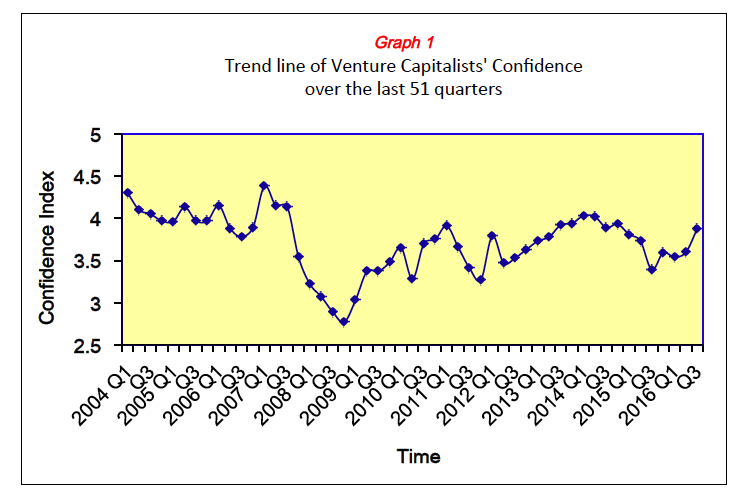 1Questions about this ongoing research study or related topics should be sent to Professor Mark Cannice at Cannice@usfca.edu.

Confidence in the future high-growth entrepreneurial environment among Silicon Valley venture capitalists surged higher in the third quarter of 2016. Recognizing major technological shifts that are opening up large new markets for determined entrepreneurs, many of the 32 responding venture capitalists in the Q3 survey focused on the resultant high potential investment opportunities in the future entrepreneurial environment. This rising optimism was prevalent despite a still challenging exit market and a backdrop of domestic and international macroeconomic and political uncertainty. In fact, the total number of venture-backed IPOs and capital raised in Q3 was up slightly from the previous quarter, but down from the year-earlier quarter2. Additionally, expectations of a higher interest rate environment make estimations of limited partner demand for and return of venture funds difficult. While VC sentiment about the future rose, Q3 venture investments were down significantly from the previous and year-earlier quarters in terms of both total capital invested and number of companies funded.3 This counterintuitive relationship between sentiment and investment may be driven by the future focus of VCs, especially in a time of long-term technology-driven opportunity versus the reality of the modest exit market. In the following, I provide many of the comments of the participating venture capitalist respondents along with my analysis. Additionally, all of the Index respondents’ names and firms are listed in Table 1, save those who provided their comments confidentially.

Technology advances wielded by nimble entrepreneurs are attractive to venture investors. Shomit Ghose of Onset Ventures confirmed “We’ve passed through the age of software and truly – finally! – entered into the age of data. Data signals are everywhere. We’ve started to understand how to make sense of all of these data signals. Investing opportunities that are relentlessly data-driven are everywhere in every industry.” Relating this transformation to deal flow, Jeb Miller of Icon Ventures reported being “busy as we’ve ever been as entrepreneurs continue to take advantage of the platform shifts to cloud, mobile and data-powered applications to disrupt massive market opportunities.”

Pointing to specific instances of enterprises engaged in these technology shifts, Mark Platshon of Icebreaker Ventures voiced “The energy and entrepreneurship going into artificial intelligence, deep learning, autonomous driving, robotics, and smart mobility is driving investment opportunities for VCs and Corporates and creating some strongly priced, fast exits (Otto, Cruise) and some impressive growth rates (Uber, Mobileye).” And Mohanjit Jolly of Iron Pillar emphasized “The innovation wave is alive and well in Silicon Valley. One could argue that we haven’t seen so many categories going through major disruption simultaneously. While there will be consolidation and some pain in over-invested categories, I think the sentiment remains very positive, especially given the public markets treating companies like Twilio and Nutanix extremely well. That does drive investment behavior and as a result investment sentiment.” And a venture capitalist respondent who provided commentary in confidence highlighted the “fervor in incubator creation and availability of investment sites enabling investor participation.”

Meanwhile, hope remains for an improving exit market. Sandy Miller of Institutional Venture Partners wrote “The VC-backed tech IPO market is showing signs of life this fall with a number of IPOs recently completed and on the docket. I think it is just the start. Assuming the fall IPOs perform well, I think we will see a robust IPO calendar post election and throughout 2017. The exit environment has been the missing piece so this is important to the venture ecosystem.” John Malloy of BlueRun Ventures also noted “The outlook for Tech IPOs looks positive for the next 6-12 months which will spur more investment downstream.” For example, Jon Soberg of Expansive Ventures relayed “Today Nutanix went public and closed 131% above its IPO price, which was higher than its last private valuation. There are great companies that are being built, and the ones that build sustainable value have great exits.”

With alternative views on the exit market, Kurt Keilhacker of Elementum Ventures contended “While IPOs are still few and far between, acquisitions are picking up. Valuations are still healthy but are better  defended by fundamentals.” And Dixon Doll, cofounder emeritus of DCM Ventures, observed a “VC fund raising backlog at or near an all-time high.” Dr. Doll continued, assessing the current exit environment as poor and IPOs of venture-backed companies in first half of 2016 as the worst in the last eight or ten years.

Meanwhile, Howard Lee of Founders Equity Partners offered “There is currently uncertainty surrounding company valuations and paths to liquidity for venture capital-backed companies as timelines to exit or liquidity have been increasing over time. This in turn has generated an increasing interest on the part of founders and early executives of technology companies to diversify some of their personal equity holdings while continuing to maintain the long term upside in their companies and ‘play for the win’. We believe there will be continued emphasis on partial liquidity for founders and employees.”

Macroeconomic issues, particularly the yield curve, appear to be having an outsized impact on the high-growth entrepreneurial environment. Venky Ganesan of Menlo Ventures reasoned “Where the Fed wind blows, venture capital funding goes. While early stage investing remains both attractive and consistent, late stage venture funding (which gets all the news) is very much dependent on interest rates at this point. The Fed has Yo-Yo’ed on the issue of raising rates which has prompted money to go out and come back in. I believe Q4 2016 will sell strong venture funding and a list of successful IPO’s.” Emphasizing a similar notion, Cole Sirucek of Founders Equity Partners concluded “There are several category leaders in this space that will continue rapid expansion over the next 6-18 months. These leaders in the context of an overall low yield investment landscape will continue to drive enthusiasm for investing in high-growth venture backed companies.” However, a responding VC who requested anonymity registered concerns over “economy uncertainty and public market multiple compression and lack of a meaningful IPO Market.”

Political uncertainty is also weighing on sentiment. One VC respondent warned the “election is impacting digital health start-ups.” However, another VC respondent provided “On the positive side, there appear to be some very large and fundamental technology developments in areas such as transportation and healthcare, which are massive segments of the economy. It’s possible these could each have outsized effects on the local venture community. On the negative side, we are entering into an election cycle and likely fed tightening (which may lead to other complications in the capital markets due to the unprecedented nature of this monetary policy situation). On balance, I remain slightly bullish.”

The cost of business in the Bay Area is increasingly seen as a damper to growth. Bob Pavey of Morgenthaler Ventures indicated “momentum is still strong, but longer term I would be a little more cautious, in part because of the very high costs of operating in the SF Bay Area.” And Lokesh Sikaria of Moneta Ventures stated “There are so many positives of the Bay Area ecosystem that the rating would have been a 5 had it not been for the incredible increase in costs (labor, rent etc.). That brings the rating down to a 3.”

A reversion to the mean may be in process. Gerard van Hamel Platerink explained “The market continues to right-size in a measured fashion. VC dollars are available for high quality companies with promising prospects while others are having difficulty getting financed as they work out the details of their business models.” Bob Ackerman of Allegis Capital pointed to “too much money in too many undifferentiated companies for too long.” He continued, saying “There is still a lot of capital waiting to be deployed but the ‘valuation hens’ have come to roost. The bar has been raised and the reset is in process. At the end of the day, this is all a natural and healthy part of the venture investment cycle.” In fact, the number of funds and total capital raised in Q3 2016 were down from the previous quarter but up from the year-earlier quarter as 2016 is on track to be a very strong year for fundraising.4 Another VC respondent provided a comprehensive analysis, detailing “A slow growth macroeconomic environment will mean a modest number of venture-backed IPO’s. Lower public liquidity will feedback into the venture ecosystem and reduce new commitments to venture funds. Those raising new funds will find the environment slower-moving (though not hostile), and that will translate into less urgency to fund new ventures, which will likely put a damper on valuations.” He continued, stating “There will still be an abundance of private equity activity because of the continued low cost of borrowing, and so there will still be decent acquisition activity driven by private equity…These factors will contribute to a lukewarm venture funding environment. There is downside risk if the economy slows into a recession and the stock market follows, which could close the IPO market until valuations come back into balance.”

In summary, average confidence among the 32 responding Silicon Valley Venture capitalists jumped higher in Q3 as anticipation of positive outcomes from major technology transformations in AI, data analytics, and autonomous products outweighed concerns over the current macroeconomic and political uncertainty, and modest exits and investments. While the current technology transformations indeed create nearly unlimited investment opportunities, these opportunities are still tied to the venture business model necessities of a welcoming exit market and motivated limited partners. As robust fundraising in 2016 has made capital available to support a wide swath of disruptive enterprises, this overhang of capital has also tended to keep valuations high, thereby making exits into the public market somewhat more challenging. With uncertainty in both the exit market and macro conditions, some caution is still warranted in this time of great technological change. Resolution of some political and economic uncertainty should arrive in 2016 and this resolution may support a more welcoming exit market and the venture investments needed to support the efforts of visionary entrepreneurs building the future of business on emerging technology platforms. While venture capitalists’ sentiment tends to be tied most closely to the expectation of improving exit conditions5 future macro unknowns could still play an unpredictable spoiler role in meeting this expectation. 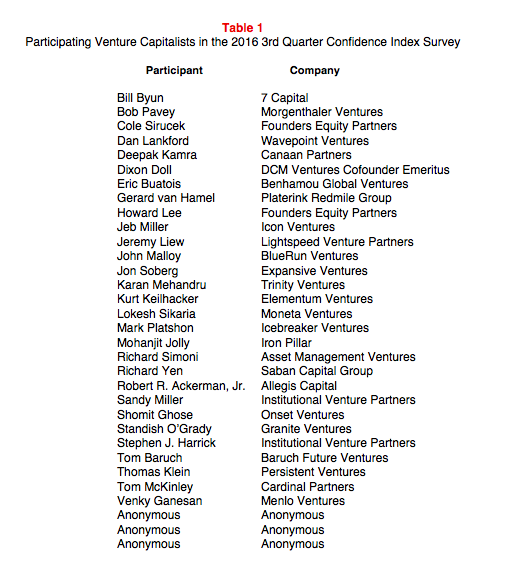 * The link to the pdf version of this article can be found here.