The Silicon Valley Venture Capitalist Confidence Index™ (Bloomberg ticker symbol: SVVCCI) is based on a recurring quarterly survey (since Q1 2004) of Silicon Valley/San Francisco Bay Area venture capitalists. The Index measures and reports the opinions of professional venture capitalists on their estimations of the high-growth venture entrepreneurial environment in the San Francisco Bay Area over the next 6 – 18 months. The Silicon Valley Venture Capitalist Confidence Index™ for the fourth quarter of 2021, based on a January 2022 survey of 21 San Francisco Bay Area venture capitalists, registered 3.9 on a 5-point scale (with 5 indicating high confidence and 1 indicating low confidence). The Q4 2021 Index edged slightly higher from the previous quarter’s reading of 3.85. Please see Graph 1 for quarterly trend data. 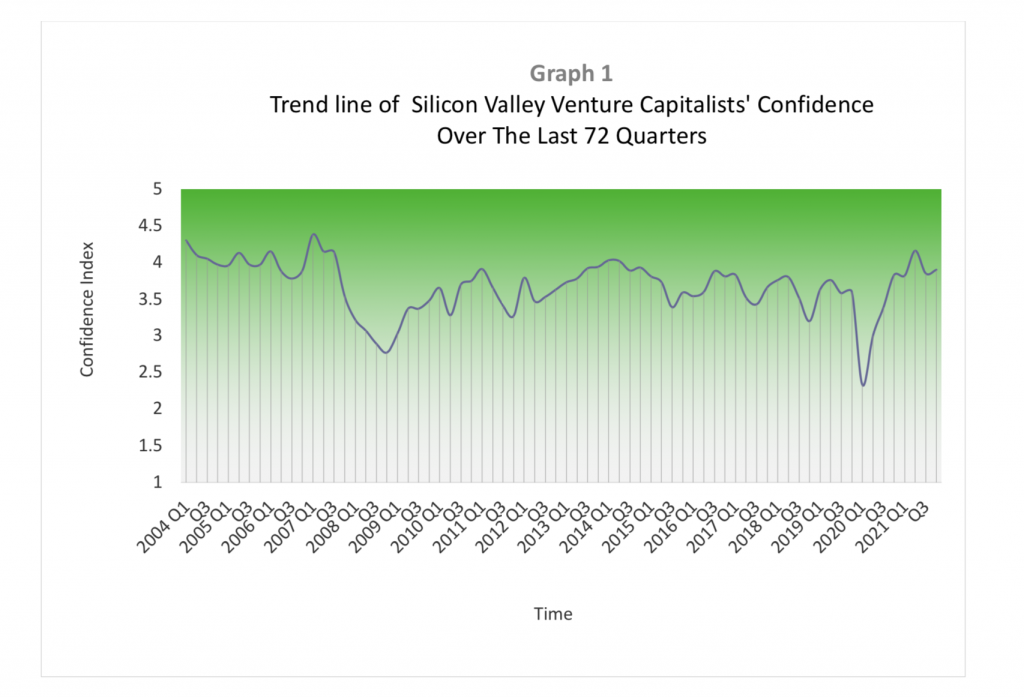 Confidence among Silicon Valley Venture Capitalists in the high-growth entrepreneurial environment rose slightly in the fourth quarter of 2021 suggesting a modestly upbeat level of sentiment in the high-growth entrepreneurial economy. The venture industry enjoyed another record year of venture investments and exits in 2021, surpassing the previous record year of 2020 handily.2 The amount of capital invested in startups in 2021 nearly doubled the previous record amount of capital invested in 2020.3 Meanwhile, the total value of exits also set a new annual record, more than doubling the previous record in 2020.4 Record exits led the way to record venture capital fundraising5 ensuring an ample supply of financing for new and follow-on investments. The oceans of capital available to fund new entrepreneurial aspirations provide a broad canvas on which entrepreneurs can paint the innovations that will pull business into the future. However, heady valuations and increasingly volatile public markets reigned in sentiment somewhat. In the following, I provide the comments of the participating venture capitalist respondents in the Q4 survey that validate their confidence rating along with my analysis. Additionally, all of the Index respondents’ names and firms are listed in Table 1, save those who provided their comments confidentially.

Valuations appear frothy after another record year for the venture industry. Mark Kraynak of Acrew Capital reported “Late private valuations are regularly exceeding public market valuations. This is not a rational inversion and will likely correct. It could correct via a rally in the public markets or the other way round, so I’m neutral and watchful.” Dag Syrrist of Valedor Partners predicted that the “combination of supply chain, inflation, rising interest rates, and pro- longed challenges around Covid, will (should?) create a more challenging capital market and exit horizon. It’s truly hard to align the divergent real-economy from financial market metrics, but like gravity it will (should?) show up in slower growth. After however many years the bull market has been relentlessly on an upswing, the head-winds are getting harder to ignore.” Charles Tan of Lumeira Ventures explained “While inflationary concerns have driven contraction in the public markets, private companies are still buffered from significant valuation compression due to support from venture funds with longer term outlooks. The increase in OpEx and CapEx demands will result in some startups failing to raise enough funding, choosing to be acquired, or having to accept more equity dilution. Longer term, innovative companies will continue to attract venture funding as there is still a lot of capital yet to be deployed.”

Howard Lee of Founders Equity Partners provided a detailed analysis, writing “Venture funding and valuations continued to climb to record levels in Silicon Valley with revenue multiples exceeding 2020 levels. Cybersecurity and crypto deals have shown both resilience and growth in terms of deals and valuations. Cybersecurity remains a growth area as work from home, decentralized work environments, and the resultant larger number of attack surfaces have all driven heightened customer risk awareness and demand for scalable security at all perimeters of the business. The decline of the SPAC market has refocused company exit strategies on traditional IPOs and M&A.” Mr. Lee continued, saying “Mitigating factors appear to be looming more prominently: interest rates, inflation, and Omicron/Covid-19 all are beginning to weigh on investor’s minds and influence sentiment. Indications of interest rate hikes from the Fed have already caused drawdowns in the capital markets which have had an adverse effect on public offerings. Fears of inflation persist and continue to dampen economic growth and potentially VC funding. In some ways, The Great Resignation may contribute to both inflation fears through wage growth and an increased number of companies or tech workers leaving Silicon Valley due to the high cost of living. An interesting effect of a potential valuation decrease or market correction would be an increase in M&A activity for companies, although with expected lower revenue multiples.”

Rising competition for Silicon Valley by other hubs of entrepreneurship may diminish its prominent place in the world of new venture creation. Bob Ackerman of AllegisCyber reasoned “The continued distribution of technology-based innovation will fuel a slow but certain decline in Silicon Valley’s domination of the innovation ecosystem. Silicon Valley’s end-state is likely to be dominated by large legacy technology companies whose ‘sunk costs’ in Silicon Valley restrict their ability to relocate their operations. Instead, driven by costs and competition for talent, these legacy technology companies will direct their growth to geographies outside of the region.”

Despite the challenges, the collective memory of innovative success in Silicon Valley should enable entrepreneurs and their venture backers to navigate through them. Dixon Doll of ImpactVC highlighted the “historic culture of the Bay Area successfully responding to crises like the one we are experiencing now…” Paul Tuan of Andra Capital also confirmed that the “SF Bay Area remains the tech venture hub of the world.” Another VC respondent who provided commentary in confidence assured that “the entrepreneurial ecosystem continues on ‘overdrive’ in the Bay Area even with the pandemic limitations on in-person collaboration. Companies are raising financing weekly, and the focus areas of cloud, security, remote collaboration, artificial intelligence vertical applications, and semiconductor innovation are exciting areas for growth and investment. It remains a time for optimism about entrepreneurism and venture capital.”

Business challenges demand solutions being developed by venture-backed firms. Jon Soberg of MS&AD Ventures emphasized “Technology is the only game in town, and every industry needs to become tech-driven. The speed with which industries are changing post-Covid is driving a massive, long term opportunity for venture that will last for many years.” To that point, Roy Thiele-Sardina of HighBar Partners added “We are seeing more software deals.” Another VC respondent who declined attribution, observed “Innovation and capital markets remain strong.”

High availability of patient capital provides the fuel for solution focused tech startups. Kurt Keilhacker of Elementum Ventures affirmed “The new emerging technologies are breathtaking in their ambition. Fortunately, the availability of capital coincides nicely with these opportunities.” Mohanjit Jolly of Iron Pillar agreed, noting “There is still a lot of dry powder waiting to be deployed, so the pace of VC investing in the Bay Area startups will continue. I do, however, expect some level of brain drain from Bay Area to other parts of the country. Additionally, I do expect softening of the crazy valuation environment over the course of 2022. This will be driven due to the trickle-down effect from the public market adjustments that are already underway. I expect existing investors to focus on their portfolios to make sure that their companies do actually ‘grow into the stratospheric valuations’ of their most recent investment rounds.”

Bill Reichert of Pegasus Tech Ventures provided context, reminding “Historically, venture capital has been a relatively tiny asset class, but in the last few years a tsunami of capital has flowed into venture capital. In parallel, growth stocks in the public markets drove the exchanges to record highs. The result was predictable – price inflation. Meanwhile, Covid has turned into a surprisingly net positive for the venture world, and even the Ubers and Airbnbs that got whacked by Covid have largely recovered. The availability of plentiful capital in the venture ecosystem, plus the global enthusiasm for tech innovation, seems unlikely to wane soon, absent some new external shock. We are seeing some churn in subsectors as some of the irrational exuberance for specific technologies moderates, but overall the world has a growing appetite for innovation, and that will continue to benefit the venture ecosystem.”

Another VC respondent who provided commentary off the record said “Venture is getting more accessible as an asset class, and lots of emerging new consumer behaviors are creating new opportunities.” One more VC respondent concurred, stating “There is a lot of ‘dry powder’ in venture fund commitments in large numbers of funds raised last year. The stock market is still highly valued, and thus limited partners will likely still need to reduce their weighting in public equities and increase their weighting in alternatives (like venture capital) to maintain their target allocations. The one potential damper on new liquidity could be a drop in public equity valuations. That could bring the public equity target allocation down just by a market decline, which could be triggered by Fed tightening or just a reduction of speculation in the public markets.”

Liquidity opportunities should continue in 2022. Jeb Miller of Icon Ventures pointed to the “vibrant exit market, abundance of capital and opportunity to scale startups with distributed teams to capitalize on the massive market opportunity to accelerate digital transformation,” for his high confidence. Additionally, Sandy Miller of Institutional Venture Partners indicated “2022 should be another robust year for tech venture capital exits. We will see the demise of the SPACs which will be a good thing. Direct Listings and IPOs will continue and there is a long list of terrific IPO candidates waiting in the wings. Plenty of money remains available for new investment in the sector though we are starting to see a sorting out between truly promising companies and me too companies which will struggle to get funded.”

In summary, confidence among Silicon Valley Venture Capitalists in the future high-growth entrepreneurial environment in the San Francisco Bay Area rose a bit in the final quarter of 2021. A second consecutive year of record VC fundraising, investing, and exits supported positive sentiment while expectations that the historic uptrend was perhaps nearing an end began to emerge. While record amounts of capital are available to fund visionary entrepreneurial ventures, concerns over inflated valuations in both public and private equities along with rising inflation restrained sentiment somewhat. Since the survey for this report, volatility in the public markets has increased and will likely weigh further on investor sentiment in the near to medium term. Still, the needs of the global economy will pull through the innovations being developed by determined startups, and ample amounts of patient risk capital are available to fund the visionary entrepreneurs who are addressing market/social needs in ways we have not yet imagined. 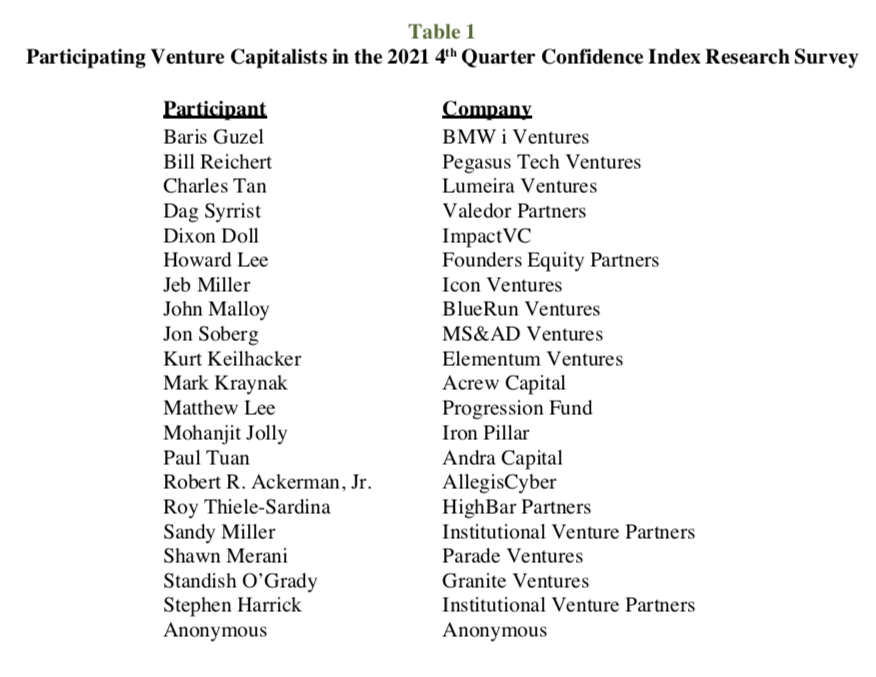 1 Dr. Cannice is Professor of Entrepreneurship & Innovation with the University of San Francisco School of Management. Professor Cannice may be reached at cannice@usfca.edu or by LinkedIn message: https://www.linkedin.com/in/markcannice/

Mark V. Cannice, Ph.D. is Professor of Entrepreneurship and Innovation with the University of San Francisco School of Management. The author wishes to thank the participating venture capitalists who generously provided their expert commentary. Thanks also to Jack Cannice, James Cannice and Joe Cannice for their copy-edit assistance. When citing the Index, please refer to it as: The Silicon Valley Venture Capitalist Confidence Index™, and include the associated Quarter/Year, as well as the name and title of the author.