The Silicon Valley Venture Capitalist Confidence Index™ (Bloomberg ticker symbol: SVVCCI) is based on a recurring quarterly survey of San Francisco Bay Area/Silicon Valley venture capitalists. The Index measures and reports the opinions of professional venture capitalists on their estimations of the highgrowth venture entrepreneurial environment in the San Francisco Bay Area over the next 6 – 18 months.1 The Silicon Valley Venture Capitalist Confidence Index™ for the second quarter of 2018, based on a June 2018 survey of 30 San Francisco Bay Area venture capitalists, registered 3.80 on a 5-point scale (with 5 indicating high confidence and 1 indicating low confidence). This quarter’s index measurement edged slightly higher from the previous quarter’s index reading of 3.76; and remained above its 14.5-year average of 3.71. Please see Graph 1 for trend data. 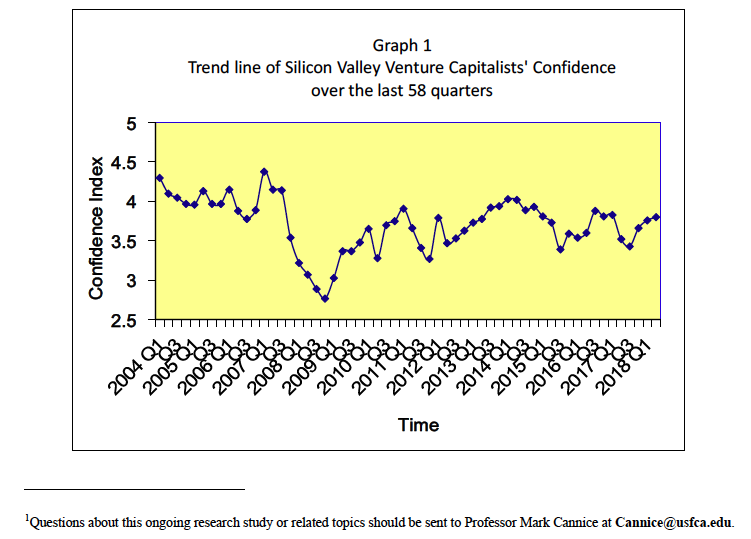 Silicon Valley Venture Capitalists’ confidence in the Bay Area entrepreneurial environment edged higher for the third consecutive quarter in Q2 2018. Continued opportunities for disruptive technology and business model innovations, ample capital, and a steady exit environment supported confidence. While liquidity activity decreased from the previous quarter, it remained at healthy levels.2 Invested capital declined somewhat from the previous quarter, but remained well above the year earlier quarter although the number of deals declined.3 Still, concerns were raised over the rising costs of doing business in the Bay Area, especially relative to other regions of new venture creation. These rising costs of business were matched by rising valuations that may make eventual liquidity options less attractive. Macro uncertainties (e.g. international and domestic politics) also raised concerns and weighed on sentiment. Still, the attraction of new market opportunities being served by new technologies and models of business outweighed other contextual concerns for now. In the following, I provide all of the comments of the participating venture capitalist respondents along with my analysis. Additionally, all of the Index respondents’ names and firms are listed in Table 1, save those who provided their comments confidentially.

Bill Reichert of Garage Technology Ventures judged “The irrational exuberance of a couple of years ago seems to have settled into a more reasonable general optimism. The ecosystem continues to broaden, with some cooling of the over-hot spots (AI, ICOs) and the diversification of innovation initiatives in a wide range of sectors, including materials science, health-tech, communications, as well as in traditional sectors, like enterprise.” Mr. Reichert concluded “The biggest single challenge facing investors in this environment is picking winners. With so many smart entrepreneurs chasing so many compelling opportunities, investors are overwhelmed. (Fortunately, we know the secret. ☺).” One venture capitalist respondent who provided comment in confidence concurred, noting “continued opportunities with innovative technologies and sufficient capital availability.”

An improving exit environment sets the stage for continued venture investing. Sandy Miller of Institutional Venture Partners confirmed “Well, we are finally here! The much-anticipated strong IPO market is with us providing the best environment in some years for venture exits. As is typical, the strong IPO market is accompanied by an acceleration in M&A activity including companies that otherwise could have gone public. So, overall, a robust environment that is a much-needed liquidity cycle to the venture capital ecosystem.” Jeb Miller of Icon Ventures confirmed “A robust exit environment of IPOs and strategic exits and healthy financing environment continues to fuel the startup economy in the Bay Area.”

Ample available capital provides a foundation for venture investment and growth. For example, Tom McKinley of Cardinal Partners attributed his high confidence to “tons of money” becoming available for investment. Another venture capitalist respondent who requested anonymity reported a “healthy M&A market, improving IPO market, and continuous strong capital flow into VC funds.” And another VC respondent specified “Principally, the environment remains strong for funding and liquidity contributing to a continued favorable environment for company financing (early through late stage), a good exit environment (IPOs and M&A), and a good fundraising environment for venture capitalists. The ecosystem is firing on all cylinders. In addition, there are some broad investing themes that have emerged over the past two years, such as autonomous vehicles, personal transportation, specialized semiconductor devices, artificial intelligence, and broad cloud adoption, in addition to biotechnology innovations such as CRISPR and genetic-based medicine. Also, there is innovation at the intersection of some of these areas. The reason the environment is a 4 rather than a 5 is that the Fed is raising rates providing some competition for capital, and the international tariff walls going up around the world could increase prices of certain materials or technologies or curtail access to markets, which could increase costs. Also, inflation could threaten the bull market in stocks. A bear market will cause exit liquidity to dry up, and that would lower liquidity across the board.”

Within the robust environment, venture demand is being tempered somewhat by growing valuations. Lisa Suennen of GE Ventures indicated “There is a huge hunger for digital solutions and a lot of venture money out there to drive new deals. In healthcare the valuations have become so overinflated and the exits so few that I fear there will be a pullback here and some bad outcomes that may cool that part of the market, particularly as the chaos around health insurance marketplaces continues.” Cole Sirucek of Founders Equity Partners commented “We are seeing significant stagnation in many of last year’s most promising companies as execution struggles to keep up with the significant expectation set in the last rounds of funding in late 2017.”

Mohanjit Jolly of Iron Pillar emphasized that the “continued confluence of technology trends (AI, ML, Deep Learning) across multiple sectors along with large pools of available capital means that funding environment will stay robust for the foreseeable future.” Mr. Jolly continued, saying “I am concerned about a valuation bubble with $1B pre-money as the new $100M, and $100M pre as the new $10M. Larger funds being raised usually have a trickle-down effect on round sizes and valuations. Proliferation of so-called Unicorns is, in my humble opinion, in part a direct result of that phenomenon.” Another VC respondent warned of “tech market exuberance and high multiples.”

Rapidly growing valuations create issues to be resolved creatively. Cindy Padnos of Illuminate Ventures reported “We are seeing relatively high seed and early stage valuations for Bay Area companies in some sought after categories and fewer Series A-type follow-on investors. In any case, the Series A ‘bar’ is higher than in the past. The proliferation of Seed II, Post Seed and pre A rounds is evidence of the impact.” Howard Lee of Founders Equity Partners offered “The continued pressure on startup companies from the larger publicly traded companies such as Google and Facebook in terms of employment, and recruiting has forced many startups to consider partial liquidity options for key employees. While funding of strong startups continues to occur, there is an increasing interest in secondaries to address the partial liquidity needs for employee retention in the face of limited IPOs and M&A exits.” Mr. Lee continued, saying “The full employment in Silicon Valley combined with rising housing costs will also put pressure on the ability of startups to attract and retain critical employees. On the whole, we are at a potential inflection point for recruiting in Silicon Valley between the large public tech companies and the strong startup companies.”

The Bay Area entrepreneurial environment is straining under its own success. Bob Ackerman of Allegis Capital explained “The cracks are beginning to show in the Silicon Valley innovation ecosystem, pointing to the unsustainability of current trends. With a household income of $117,000 qualifying as low income for a family of four, unaffordable housing, continued escalations of startup operating costs and struggles recruiting employees to support growth, all point to a pressured ecosystem. The growing evidence that valuations on some highly capitalized startups are suspect is forcing investors to question the investment calculus in Silicon Valley. The State of California’s discussion around surtaxes on venture capital profits may well accelerate the consideration of alternative locales for investment and innovation.” Other regional entrepreneurial hubs are competing for talent and capital. Renata George of Zenmen reasoned “Despite some unfavorable factors cited by entrepreneurs and investors here and there, I think the entrepreneurial environment will not change much in the next 6 – 18 months. Although, we keep an eye on redistribution of the venture capital into other states of the country, as well as growing US investments in other countries, for example, Canada.” Furthermore, Cindy Padnos of Illuminate Ventures predicted “It is likely that growth in Bay Area entrepreneurship will continue, but not necessarily at the same pace as some other ‘emerging’ US geographies. We are seeing much faster expansion than in the past in areas like Seattle and Pittsburgh, for example. Many aspects of their entrepreneurial ecosystems are maturing to a point where they can sustain startups without requiring relocation.” Another VC respondent contended “I think there’s going to be a deceleration in the next couple of years. Too many venture dollars soaked up by later-stage start-ups, headwinds from the Facebook data scandals, rising cost of living in Bay Area, etc. A bit of friction is developing.”

Broader macro issues are also creating uncertainty. Bob Pavey of Morgenthaler Ventures stated “Political and trade uncertainty are concerning.” Jon Soberg of Expansive Ventures shared “I am concerned about the workforce in Silicon Valley as it relates to immigration, and I think that may have significant consequences over time, but strong economic conditions persist at present with a lot of capital available.” Another responding venture capitalist noted “Strong current software demand, tempered by a bubbly market and uncertain VC and tax legislative prospects.” John Malloy of BlueRun Ventures pointed to “summer doldrums.” Finally, Dag Syrrist of Vision Capital added “We’re still sorting out and trying to understand the impact of US trade policy, and impact on longer term capex, opex and hiring by corporations. On the consumer side, rising interest rates and a lag in income makes consumer centric spending unclear. Offsetting these possible head winds is dramatic innovation that offers opportunities in spite of the macro picture. In other words – I’m hedging.”

In summary, confidence rose slightly in the second quarter of 2018 as venture capitalists, with abundant capital to fund many of the high potential new ventures launching and growing in the Bay Area, expected a better IPO and M&A market on the horizon. However, the Silicon Valley entrepreneurial ecosystem is showing signs of strain – largely emanating from its own success. Rising costs to business and the talent that drives those growth ventures continue to rise, making the region less attractive and more challenging to operate from. Meanwhile, high valuations may make attractive liquidity events more difficult to obtain and also attract the notice of government authorities that seek potential new sources of revenue. So, while the Silicon Valley innovation engine continues to percolate – identifying, growing, and enjoying the benefits of disruptive new ventures driven by Silicon Valley entrepreneurs, the stakes appear to be growing with the future more difficult to discern now than in less heady days. 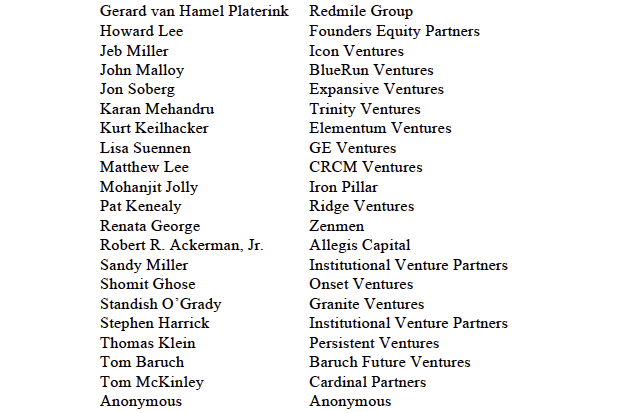 Mark V. Cannice, Ph.D. is Department Chair and Professor of Entrepreneurship and Innovation with the University of San Francisco School of Management. The author wishes to thank the participating venture capitalists who generously provided their expert commentary. Thanks also to James Cannice for his copy-edit assistance. When citing the Index, please refer to it as: The Silicon Valley Venture Capitalist Confidence Index™, and include the associated Quarter/Year, as well as the name and title of the author.