The Silicon Valley Venture Capitalist Confidence Index™ (Bloomberg ticker symbol: SVVCCI) is based on a recurring quarterly survey of San Francisco Bay Area/Silicon Valley venture capitalists. The Index measures and reports the opinions of professional venture capitalists on their estimations of the highgrowth venture entrepreneurial environment in the San Francisco Bay Area over the next 6 – 18 months.¹ The Silicon Valley Venture Capitalist Confidence Index™ for the second quarter of 2017, based on a June 2017 survey of 32 San Francisco Bay Area venture capitalists, registered 3.52 on a 5-point scale (with 5 indicating high confidence and 1 indicating low confidence). This quarter’s index measurement fell sharply from the previous quarter’s index reading of 3.83; it is also well below the 13.5-year average of 3.72. Please see Graph 1 for trend data. 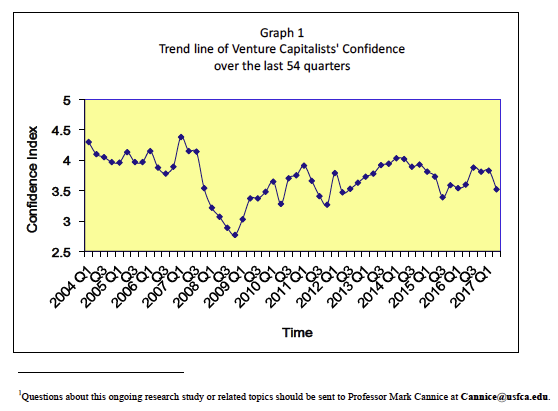 Silicon Valley venture capitalists’ confidence in the future high-growth entrepreneurial environment fell sharply in the second quarter of 2017. This decline in confidence appears to have been driven by continuing uncertainty in the macro environment, high late-stage valuations, and a somewhat less welcoming exit market than had been anticipated, with the last factor likely a function, at least in part, of the first two². In fact, the number and total capital value of exits declined significantly in Q2 from the previous and year-earlier quarters.³ Specific macro issues, such as political uncertainty at home and abroad, new immigration constraints, and Bay Area living costs are driving up the risk and cost of establishing new ventures. . Despite these challenges, venture investments increased in Q2 over Q1, particularly in terms of total capital.4

Although confidence did decline sharply in Q2, it was not for a dearth of opportunities driven by the continuing innovations that are emanating from Silicon Valley. In particular, technology advancements impacting healthcare, transportation, and vertical markets across a variety of industries portend significant growth. In the following, I provide many of the comments of the participating venture capitalist respondents along with my analysis. Additionally, all of the Index respondents’ names and firms are listed in Table 1, save those who provided their comments confidentially.

Innovation continues to drive new market opportunities. John Malloy of BlueRun Ventures indicated “Despite well-deserved negative headlines within high-tech, there continues to be strong innovation in significant markets such as transportation, healthcare and next generation platform technologies.” And Roy Thiele-Sardiña of HighBar Partners affirmed “There continues to be areas of interest in Software and Software as a Service.” Another VC respondent also assured, “SaaS and cloud transitions are still driving a significant set of opportunities.” Somewhat less sanguine, Kurt Keilhacker of Elementum Ventures reflected “The public attention to the emergence of useable Artificial Intelligence has again raised the spectre that ‘this time is different’ and that whole industries will soon be transformed. Somewhere beneath the hype one can’t but be impressed by some of the new startups and their daring approaches to real world problems. Indeed, there will be several significant breakouts.” More broadly, Jeremy Liew of Light Speed Venture Partners highlighted “continued positivity.”

An overall healthy entrepreneurial ecosystem is providing pathways for innovative technologies to become disruptive. Jeb Miller of Icon Ventures reported “We’re continuing to see significant opportunities to build disruptive companies tackling vertical market and business use cases that leverage modern technology stacks and business models. The fundraising market remains robust and the exit markets are healthy.” .” To Mr. Miller’s point, the total amount of capital raised in Q2 surpassed that raised in Q1 although the number of new funds was the same.5 Another responding venture capitalist who preferred to offer comment confidentially detailed “The business environment in general is good so it is a favorable time for startups and venture-backed businesses, and there are disruptive trends in health care, education, industrial processes, and transportation (including automobile manufacturing) that favor innovative, agile companies that should continue to draw funding…Mid-stage venture-backed companies with good business models should feel the tailwinds of a favorable business environment; early stage companies can target disruptive opportunities in large markets rather than niches, and late-stage venturebacked companies should have a favorable exit environment. After a long period in the doldrums, many specialty chip manufacturers are experiencing increasing demand for various specialty semiconductor products, which should spur downstream innovation in software platforms and applications using the capabilities of various new chips and chip configurations in large markets such as industrial processes, transportation, and the automotive-related industries. Security should continue to experience growth in the enterprise, although there do not seem to be any ‘must-have’ new software platforms or applications that will spur outsized growth over the near term in enterprise software.”

Still the broader environment remains uncertain. Jeff Clavier of SoftTech VC commented “Q1 and Q2 2017 statistics have shown a steady decline in the number of deals and dollars invested across the ecosystem. At the same time, this administration is threatening to reduce access to visas and other immigration measures (International Entrepreneur Rule being delayed and cancelled), which will create additional pressure on hiring in core centers where we already have a shortage of talent. It will be increasingly competitive for startups to pay up on salaries and benefits in an environment where less is being raised.” Similarly, another responding VC shared “I’m concerned a bit about the macro environment and the trends emerging with immigration that I think will impact Silicon Valley.” Specific to the macro environment, Dag Syrrist of Vision Capital voiced concern over “political uncertainty, and overall economic climate, exasperated by directionless politics.” Mr. Syrrist added “The economy overall will likewise be cautious in face of increased uncertainty. Locally, the mind-numbing cost of living and housing will make it harder and harder for companies to justify locating in the Bay Area, except for the most over funded startups with a business imperative to be here.”

Another VC respondent expressed more optimism, writing “In terms of the business environment, regulatory trends are favorable for business, tax policy is trending positive and even if there is no tax reform this year there is at least no movement for tax policy adverse to businesses (corporate tax cuts if enacted will be a major boon to growth and liquidity), and the stock market is providing liquidity for venture-backed businesses. Potential upside conditions this year are favorable tax policy changes and corporate earnings growth; a current negative is the high valuations in the public markets.”

Concerns over continued high valuations also weighed on confidence. Bob Ackerman of Allegis Capital maintained “The Silicon Valley innovation ecosystem is showing some of the adverse effects of excess – too much capital driving inflated valuations with uncertain capital structures in so-called ‘Unicorns’, unparalleled competition for talent with an accompanying entitlement culture and inflated costs of doing business, and technology valuations being applied to technology-enabled startups. While not a syndrome to unique Silicon Valley, we have become the HQ for excess in the current innovation cycle.” Another venture capitalist contributor noted similar trends, contending the “frothy public market for tech stocks seems unsustainable,” while one other VC pointed to “underreported angel ecosystem problems.” With regard to the life science sector, Gerard van Hamel Platerink of Redmile Group observed “The rightsizing of the venture market in healthcare continues with breakthrough companies able to raise capital at fair valuations. Frothy expectations are typically not encountering much investor interest, as should be the case.”

Following hefty private market valuations and general environmental uncertainty, the exit market is not as welcoming as had been expected. For example, Howard Lee of Founders Equity Partners relayed “The continuing uncertainty in the IPO market has led to fewer tech companies going public in 2017 compared to the same period in 2016. A large number of highly valued late-stage companies or unicorns have remained private and have had to raise additional capital, some with uneven fundraising results. Management team and company expectations on valuation continue to be adjusted downwards for several of these late-stage companies. Combined with the higher cost of attracting and retaining talent in Silicon Valley and the lengthening time to exit for late-stage companies, the economic environment for venturebacked companies remains challenging.” Dixon Doll of Impact Venture Capital explained “Although lots of capital is available to get started and grow, the exit environment is in transition. Tech IPOs are problematic, but on positive note PE buyouts, fairly liquid secondary market, and conventional M & A are still fairly common. Net-net, exit environment is fairly strong but changing.” Cole Sirucek of Founders Equity Partners also found “Recent public exits have underwhelmed and there appears to be a renewed focus on value for later stage private rounds. This tightening of liquidity in the later rounds will have knock on effects throughout the ecosystem.” And Lokesh Sikaria of Moneta Ventures advised “While the capital markets are doing well right now, potentially providing exits for some of the venture-backed companies, the overall cost increases in the Bay Area should still be a continuing concern.”

Hitting a more upbeat note on the exit market, Sandy Miller of Institutional Venture Partners reasoned “The IPO market has entered the quiet summer period, but I expect we will see a resurgence in the fall. There are a large number of very high-quality companies that have filed silently looking for the right time to push forward their IPO. The other liquidity development for the venture industry has been an increase in the interest of private equity firms to acquire venture-backed technology companies. The M&A market for tech companies is active with interest from both large tech and non-tech companies. So, I think, all in, it will be a good environment for exits for the fall of 2017 and into 2018.” Striking a more cautious tone, Bill Reichert of Garage Technology Ventures said “I think the venture ecosystem is healthy, but I am concerned about the macro environment. The IPO market has been good, but not quite as robust as we were hoping, and there is certainly more downside risk in the public markets right now than there is upside opportunity. A dampening of market enthusiasm in the next six to 18 months seems more likely than another burst of irrational exuberance. So everyone is being a little more cautious about ‘financing risk.’ Can we count on an up round?”

In summary, despite increases in capital raised in venture funds and venture capital deployed in new investments, the VC confidence index declined sharply in the second quarter of 2017. This significant drop in sentiment was driven by continuing macro environmental uncertainty, high private market valuations, and a tepid public market for exits. While disruptive innovations continue to emanate from Silicon Valley at breakneck speed, the venture model that relies on a buoyant exit market to replenish the system and attract and retain LPs is under some pressure while factors outside of the venture industry’s control impact the liquidity time-line of its portfolio plans. For example, as the number of exits declined in Q2, the average time to exit has increased by more than a year over the last decade.6

Whether the decline in confidence is a tell for future capital flows or a reflection of current but temporal macro issues is unclear. In either case, the innovation engine of Silicon Valley continues to attract entrepreneurial talent from around the world and new impactful ventures can be expected to continue to surprise us. 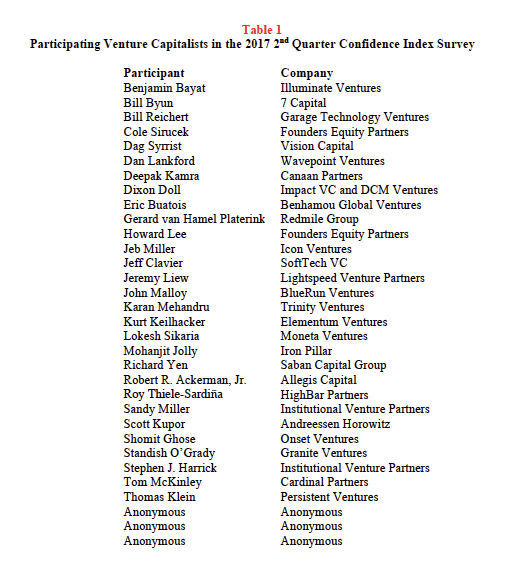 Mark V. Cannice, Ph.D. is Department Chair and Professor of Entrepreneurship and Innovation with the University of San Francisco School of Management. The author wishes to thank the participating venture capitalists who generously provided their expert commentary. Thanks also to Jack Cannice and James Cannice for their copy-edit assistance. When citing the index, please refer to it as: The Silicon Valley Venture Capitalist Confidence Index™ , and include the associated Quarter/Year, as well as the name and title of the author.

2 Related empirical studies (e.g. Cannice and Goldberg 2009) have shown that VC confidence is most closely correlated with the ability to take portfolio firms to an initial public offering so the decline in sentiment tied to unmet liquidity expectations is not unexpected.

* The link to the pdf version of this article can be found HERE.