The Silicon Valley Venture Capitalist Confidence Index™ (Bloomberg ticker symbol: SVVCCI) is based on a recurring quarterly survey (since Q1 2004) of Silicon Valley/San Francisco Bay Area venture capitalists. The Index measures and reports the opinions of professional venture capitalists on their estimations of the high-growth venture entrepreneurial environment in the San Francisco Bay Area over the next 6 – 18 months.2 The Silicon Valley Venture Capitalist Confidence Index™ for the fourth quarter of 2019, based on a December 2019 survey of 30 San Francisco Bay Area venture capitalists, registered 3.6 on a 5-point scale (with 5 indicating high confidence and 1 indicating low confidence). This quarter’s Index measurement was little changed from the previous quarter’s Index reading of 3.58. Please see Graph 1 for quarterly trend data over the last 16 years. 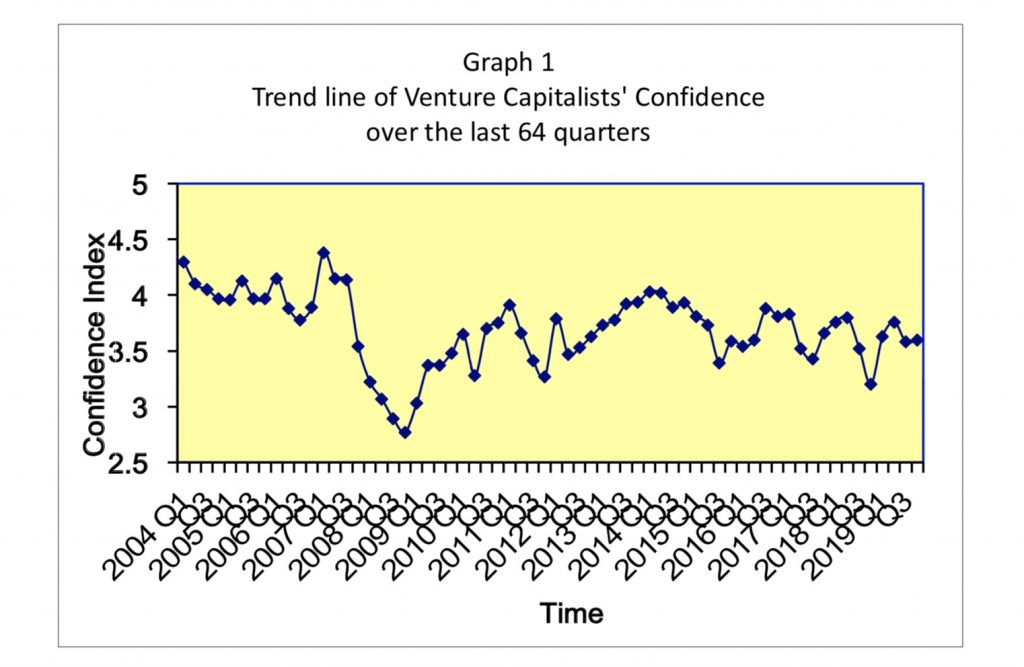 Confidence among Silicon Valley Venture Capitalists in the future high-growth venture entrepreneurial environment in the San Francisco Bay Area was essentially unchanged in the fourth quarter of 2019 from the previous quarter. The positive drivers of sentiment included expectations of growth opportunities resulting from continuing advances in potentially disruptive technologies along with a healthy exit market for existing portfolio investments. Sentiment was tempered somewhat by concerns over high valuations and the reception by the public markets of some venture-backed companies that has been less than welcoming of late. Furthermore, emerging doubts on the continuing viability of Silicon Valley as the global hub of venture-backed growth firms were linked to unsustainable costs in the Bay Area versus other suitable geographies for more cost effective entrepreneurial economies.

A cautious outlook appears warranted as venture investment declined significantly in Q4 2019 from the previous and year-earlier quarters, both in terms of total capital deployed and the number of investments.3 Exit activity also declined significantly in Q4 2019 – sequentially and year on year – as measured by total deal value and deal count, and was at the lowest total in over 2 years in terms of deal value and 9 years in terms of deal count.4 This strain on the venture capital business model in terms of fewer deals and fewer exits, could, over time, dampen the vitality of the Region’s entrepreneurial ecosystem, and this worrisome trend was noted by some of the responding venture capitalists in this quarterly report. Still, the whole of 2019 was a banner year for achieving liquidity5, replenishing capital that could be made available for future high potential ventures. In the following, I provide many of the comments of the participating venture capitalist respondents that validate their sentiment along with my analysis. Additionally, all of the Index respondents’ names and firms are listed in Table 1, save those who provided their comments confidentially.

Many of the responding venture capitalists expressed high confidence based on technology trends, capital availability, and an increasing focus on value creation. For example, Jeb Miller of Icon Ventures credited a “robust supply of capital, healthy exit environment, and return to the discipline of capital efficiency versus the grow at all cost mantra of the unicorn class,” for his high confidence. Tom McKinley of Cardinal Ventures confirmed “Venture Capital is still pouring into Bay Area Startups.”

Tim Draper of Draper Associates emphasized “financing the transformation of health care, governments, insurance, real estate, finance, and banking at a time when there is AI and Bitcoin – a perfect storm.” Eric Buatois of Benhamou Global Ventures suggested “The digital transformation of the enterprise is impacting every vertical in every part of the world. The quality of B to B companies looking for funding is increasing. The afflux of companies created abroad is continuous with reasonable pre-money valuations for series A.” Tom Baruch of Baruch Future Ventures also noted that the “next big technology ground swell of AltData is coming fast.” And a VC respondent who provided commentary in confidence explained “The venture ecosystem is still characterized by a lot of capital in the system, and the trends of 5G, AI, connected vehicles, and large tech company research and acquisition budgets bode well for start- ups and early-stage companies looking for capital with few clouds in the picture today except valuations, international trade, and the potential for disruption or clarity with the US elections. Until election time, this should remain a favorable environment. Should high-tax, high-regulatory, low-productivity candidates start to poll well in U.S. polls for the presidential election in November, then the horizon would darken. Now is a good time to make hay while the sun shines.”

Liquidity opportunities also support high confidence. Sandy Miller of Institutional Venture Partners indicated “2020 is shaping up to be a great year for exits for venture-backed tech companies. The IPO market is receptive and the acquisition appetite is sky-high for the cash-rich big tech companies, as well as the tech private equity funds.” Another VC respondent pointed to “bullish stock markets,” saying “VC is basically driven by those valuations.” Mohanjit Jolly of Iron Pillar added “I think currently there is a blend of emotions running through Silicon Valley. There is the euphoria of the stock market running and pending tech IPOs in 2020. The current administration will try to keep the economy propped up through the election year; but clearly the disappointments of 2019 unicorn IPOs and the WeWork debacle have created a bit of a headwind over the past few months. There is still plenty of capital ready to be deployed, and, as always, amazing entrepreneurs disrupting industries across the board. The pace of investing and M&A will continue their trajectory through 2020.”

Sounding a note of caution, Venky Ganesan of Menlo Ventures penned “While the fat lady has not started singing yet, she is definitely warming up. A combination of factors including geo-political instability, private unicorns blowing up, and being late in the economic cycle means that 2020 is going to be a very challenging year for venture backed. Expect people to go back to the basics and focus on profitability and cash flow rather than growth.” Focusing on the macro environment, Alex Fries of Alpana Ventures shared “If the economy keeps the way it is, we are in for a good ride. If Trump wins, I think the economy, stock market, angel investment, IPOs, etc. will all flourish. If he loses, I would change my answer to a 2.”

Focusing on high valuations, Bill Reichert of Garage Technology Ventures predicted “market indigestion as unicorns try to get liquid.” And Jon Soberg of MS&AD Ventures said “I think the markets will cool off a bit and I think we could see an adjustment in later stage valuations because of some of the IPO issues and high burn rates in some late stage companies.” Dag Syrrist of Vision Capital reported “seeing downward pricing pressure across most segments, and far longer (and more realistic) decision process among funds.” Similarly, Ricky Lu of Cybernaut Zfounder Ventures reasoned “I think the Lackluster IPO performance of tech companies like Uber, ZM, Lyft has caused VC fund managers to re-evaluate the exit potential of their portfolios. VCs have become more strict on financial projections and the assumptions used. That caused them to pass many investment opportunities that they would invest in the past.”

Howard Lee of Founders Equity Partners detailed “The fourth quarter of 2019 saw a continued growth in the venture secondary market in terms of interest in partial liquidity from founders, executives, and early preferred investors in growth-stage companies. The failed IPO attempt by WeWork and the subsequent effect on broad investor sentiment across nearly all sectors and stages has been seen in the lengthened time for diligence, prolonged closings, and downward pressure on valuations. The focus on profitability, business fundamentals, and management discipline, while never fully absent in the minds of investors, is a healthy reckoning for the venture industry in general. In fact, it may contribute to an improvement in optimism as valuations approach more rational levels in 2020.” Another VC respondent offered “One of the most common themes here in Silicon Valley is complaining about the public markets and claiming that ‘public markets are hard’. However, public markets have always been hard. At the end of the day, creating value as a company in a sustainable manner is always a very challenging task. Yet, oversupply of capital in Silicon Valley created an inaccurate sense of wealth creation that is only on paper and that is driven by FOMO. So, the real issue isn’t that public markets are hard; they are indeed, it’s the fact that the private markets have been so easy for so long.”

Highlighting macro challenges, Bob Pavey of Morgenthaler Ventures argued “The Bay Area has become so expensive that smart entrepreneurs are locating elsewhere. On top of that money from China which has come largely into the Bay Area and supported its growth is drying up due to the Trade War and CFIUS.” And Bob Ackerman of AllegisCyber concluded “The Silicon Valley innovation ecosystem is losing its ‘MoJo’, and its reputation as the global focal point for technology innovation. A toxic cocktail of costs and culture are breathing life into emerging alternative ecosystems globally. It’s highly likely that we will never again see the concentration of technology-driven innovation that has been ‘Silicon Valley’. It has been a great run in California but democratization of innovation has finally arrived.” A VC respondent who requested anonymity warned “We see continued enthusiasm by investors to fund high-growth companies at very high valuations. At the same time, we are seeing CEOs considering alternatives to Bay Area for expansion because of (a) high cost to retain employees (b) scarcity of talent and (c) high cost of living.”
Finally, John Malloy of BlueRun Ventures summed up the current state of the entrepreneurial environment, writing “Hope still springs eternal for emerging companies in Silicon Valley but the mantle of success is a lot heavier on technology leaders & companies these days. This is more than just another negative news cycle. Smart founders need to take into account this new reality & responsibility when shaping their products and building their companies.”

In conclusion, confidence among Silicon Valley venture capitalists stayed constant in the last quarter of 2019 from the previous quarter and also stayed below its 16-year average. While optimism was communicated on the continuing level of technology led opportunities and a continuing supportive exit environment, persistent concerns on inflated valuations and a reassessment of those valuations in the context of recent troubled IPOs and attempted IPOs brought sobering recognition of the disparity of private and public perceptions of value. Also notable was a growing sense that the supportive entrepreneurial environment of Silicon Valley may have nearly run its course due to high costs and unrealistic expectations making possible its own disruption by competing geographies that also support innovative endeavors. Ultimately, the test will come as to whether this Region that has consistently launched new industries that have changed the world can continue to be the global cradle of creativity when the costs and challenges of growing nascent firms may have gotten out of hand.6 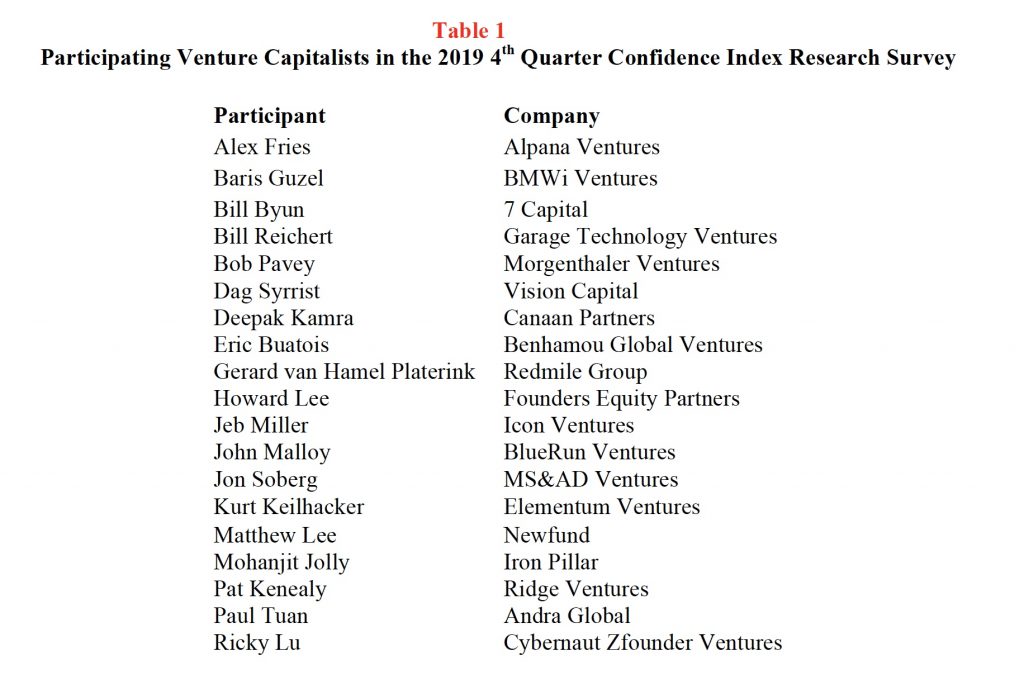 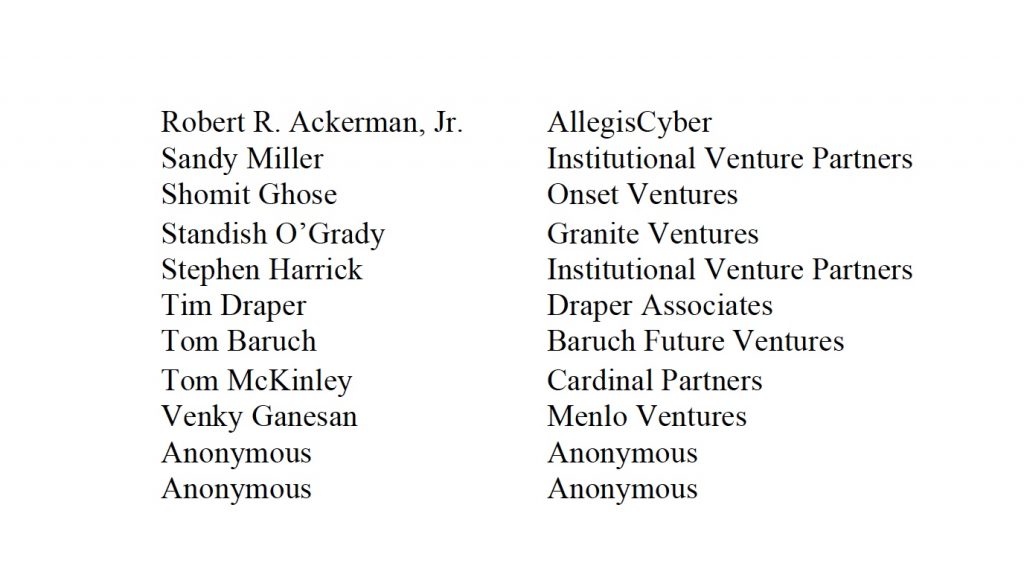 1 Dr. Cannice is Professor of Entrepreneurship & Innovation with the University of San Francisco School of Management. https://www.linkedin.com/in/markcannice/

2Questions about this ongoing research or related topics may be sent to Prof. Cannice at Cannice@usfca.edu or by LinkedIn.

6 It is important to note that the survey for this research was conducted prior to the wide recognition of the coronavirus and subsequent global health fears; therefore, this factor that could affect sentiment is not accounted for in this quarterly report.

Mark V. Cannice, Ph.D. is Professor of Entrepreneurship and Innovation with the University of San Francisco School of Management. The author wishes to thank the participating venture capitalists who generously provided their expert commentary. Thanks also to Jack Cannice and James Cannice for their copy-edit assistance. When citing the Index, please refer to it as: The Silicon Valley Venture Capitalist Confidence Index™, and include the associated Quarter/Year, as well as the name and title of the author.